Watch this short video to learn more about our history and our products.

The story of the Junket brand begins in Denmark in 1874, when Christian D. A. Hansen founded Hansen’s Technical-Chemical Laboratory in Denmark to make rennet extract for the cheese making industry.

Hansen was born in 1843. In 1864 he earned his MA in pharmaceuticals and after some time as a pharmacist as well as editor of publications about pharmaceuticals he began working as an assistant at the chemical laboratory of the University of Copenhagen. In 1872 he won an award for his research.  Throughout his life he continued to work in the field of pharmaceuticals and to fund education.

One of the topics of Hansen’s research at the University was digestive enzymes, including pepsin. In 1873 he and a partner opened a small factory that made pepsin preparations for people suffering from digestive problems. Hansen also began working with rennet, which is produced in the fourth stomach of ruminants such as cows and is used in making cheese; the rennet makes the milk coagulate so that the watery whey can be drained away, leaving the curds that become cheese. The source of the rennet was normally calves that had not yet been weaned, and thus it was available only when a calf was slaughtered. While there were various ways of extracting and preserving the rennet needed for cheesemaking, there was no standardization of the strength of the solution and the results were often unsanitary. Hansen used his experience in chemistry and pharmacology to produce “an extract of high keeping quality, uniform strength, and free from the contaminating impurities characteristic of the – often foul – liquid of uncertain coagulating power produced by soaking the stomachs in whey in the dairy.”

In 1874 Chr. Hansen’s Technical Chemical Laboratory (which came to be known simply as Chr. Hansen’s Laboratory) was founded in Copenhagen. Its products, which besides rennet included color to add to the milk to make the cheese more attractive, rapidly became very widely used in the cheese industry not only in Denmark but in many other countries.

In 1877, Johan D. Frederiksen, a Danish dairyman and agriculturalist, emigrated to the United States and the following year opened a branch of Chr. Hansen’s Laboratory in New York State, which at the time was the hub of the developing cheesemaking industry in America.

In 1882 the plant moved to Little Falls, New York. In 1891 a new factory built on Lock Island in the Mohawk River at Little Falls began operations; the island was renamed Hansen Island. The factory grew over the years. 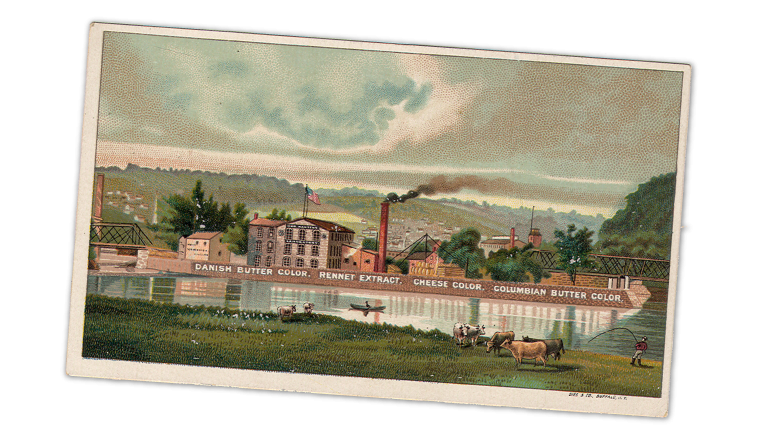 Up to that point, the emphasis of the firm had been on the manufacturers of large quantities of cheese.  Frederiksen had the idea to expand the market by making a product to appeal to American women for use in the home. In 1886 Hansen’s Household Rennet Tablets made their appearance, accompanied by a simple recipe to make junket, an English dessert known also by other names such as curds and whey, slip, or rennet custard. The basic recipe has not changed materially since then. 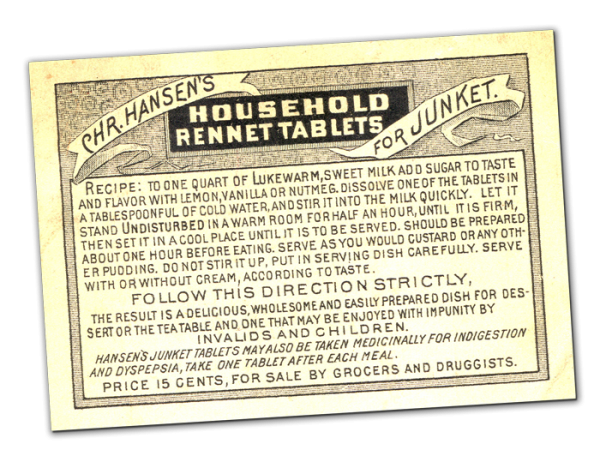 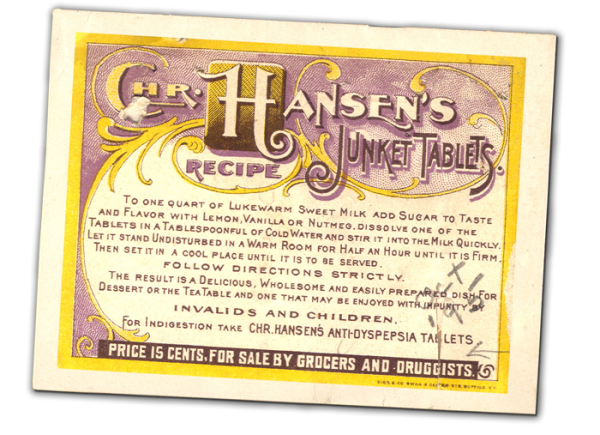 As the American public became familiar with the tablets and the delicious dessert made with them, people began to refer to them as “Junket Tablets” (much less of a mouthful than “Hansen’s Household Rennet Tablets for Junket”), and by 1895 the company had renamed them “Chr. Hansen’s Junket Tablets.”

In 1897, Chr. Hansen’s Laboratory produced a little booklet named “Dainty Delicacies for Artistic Desserts” and included it in the package with the tablets. The booklet opened with the announcement, “We are pleased to present to the cooks and housekeepers of America the first and only collection that has ever been made of recipes for the preparation of Junket….In a careful review of the many works on cooking, or even the special works on desserts or cooking for invalids, you will rarely find more than one recipe for making ‘Junket…’” The booklet contained several dozen recipes, including two for “Wine Junket” and the basic recipe in five languages. More importantly, also included was a recipe for “Junket Cream Ice,” which was described as “exquisitely delicious.” Ice cream became an important part of the Junket brand, from the early years of ice cream freezers through the advent of the “automatic refrigerator” and to the present. 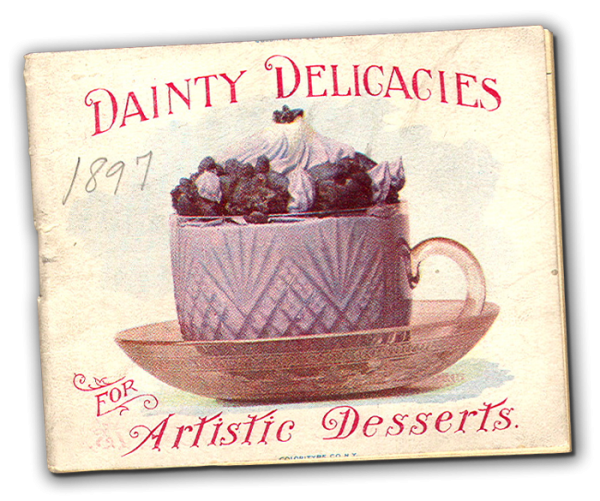 Junket Tablets were not the only products designed to appeal to the household cook; Junket brand food colors and flavors were also available, and the little recipe book made suggestions for producing desserts that were as appealing to the eyes as to the palate. By 1900 there were six colors and twelve flavors.  The dessert was remarkably adaptable: with different flavors, toppings, things put under the custard or in the custard, something could be made to appeal to everyone.  New versions of the little booklet were produced over the years, and a new image appeared: Little Miss Junket, offering servings of the dessert with the motto “Have Some Junket.” She continued to represent the company for many years, including in souvenirs given out at the St. Louis World’s Fair. 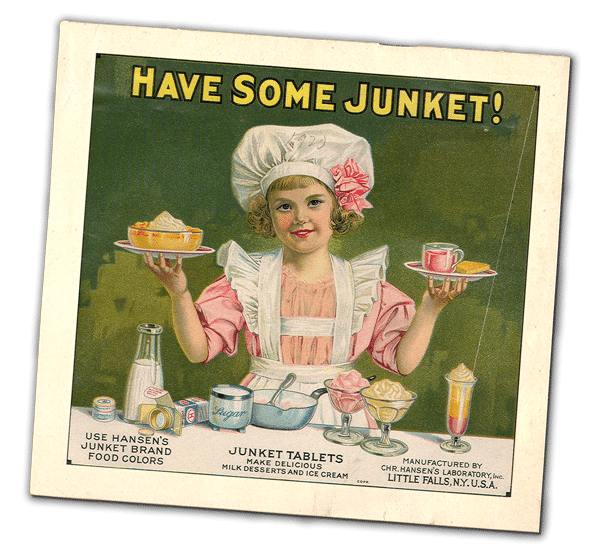 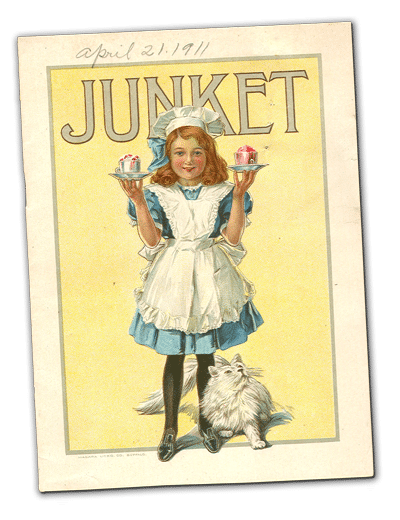 Each package of Junket continued to provide a small recipe booklet, but in 1911 a much larger booklet, called simply “Junket,” was produced, as part of an impressive national advertising campaign.  In it were exquisitely beautiful colored lithographs and a selection of recipes.  This practice continued for many years – small booklets in the packages, and larger books available upon request. Junket was frequently advertised in such magazines as Good Housekeeping and Child Life, and through displays at World’s Fairs and other exhibitions.

The recipe for Junket was simple, but in 1911 the company offered something that made it even easier to make desserts: Nesnah (“Hansen” spelled backwards). Nesnah was a powder, already sweetened, flavored, and colored, so that it was necessary only to heat the milk and mix in the powder to make junket or ice cream.  It had the added convenience of allowing a single serving to be made by using only a spoonful of the powder. Initially there were nine flavors; within a few years the number was reduced to six, and the name Nesnah was changed to Junket Powder, later Junket Desserts and Ice Cream.  Any recipe given for the tablets could be made using the powder of the correct flavor; any recipe given for the powder could be made by starting with the tablet. 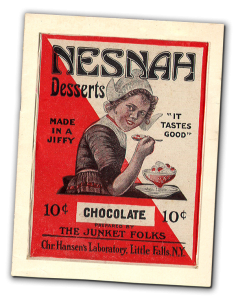 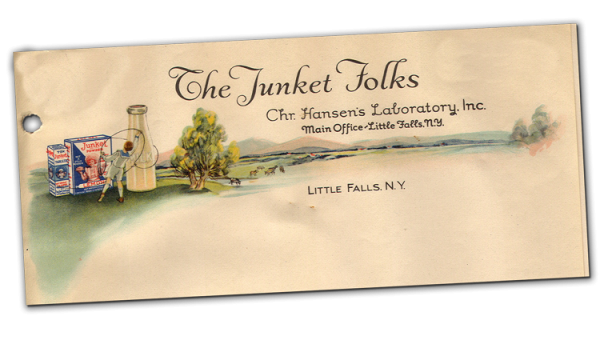 It was around this time, too, that the part of the company that dealt in household supplies began identifying itself as “The Junket Folks,” which many of its customers had called it for years; Chr. Hansen’s Laboratories appeared below that on boxes and letterheads, in smaller letters.

The Junket Folks appealed not only to adults but also to children, with such items as a fold-out Junket Party cardboard standup, small pinbacks, coloring books, puzzle and game books and even a book of magic tricks given out over the years.

In 1930, the manufacturing of those products intended for commercial or farm use was moved to a new factory in Milwaukee, since the center of the cheese industry was no longer in New York but farther west.  The Junket Folks, however, remained in Little Falls.  By 1934 they were producing chocolate and vanilla Junket Ice Cream Mix, which didn’t even require warming the milk before mixing and freezing – and serving in Junket brand ice cream cones. 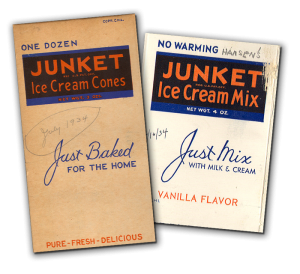 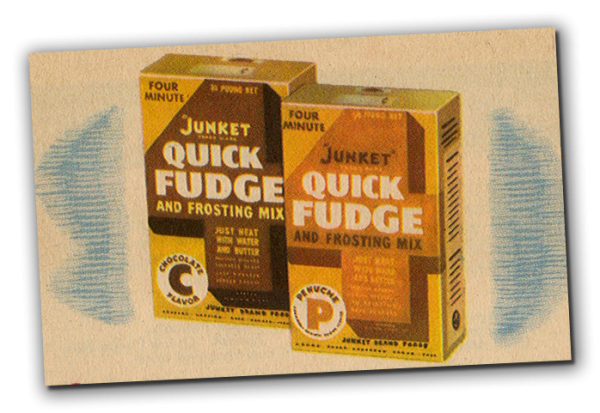 Until 1938 the dessert products made by the Junket Folks were all based on rennet. That year, Junket Quick Fudge and Frosting Mix appeared.  It was later called Minute Fudge and Hansen Island Fudge, and was available as chocolate and penuche and, briefly, coconut. Fudge, frosting, candy, and other treats could be made using the mix, which did not include any rennet.

1939 saw the arrival of Junket Danish Dessert, another non-rennet mix, based on the traditional Danish fruit-flavored Rødgrød. The original Raspberry-and-Red-Currant (later just Raspberry) was eventually joined by Strawberry, and both could be used as desserts by themselves or in pies or sauces.   During World War II, Junket tablets, powder and freezing mix continued to be available, but the Quick Fudge Mix was temporarily discontinued and the supply of Junket Danish Dessert was “limited, probably for the duration.” The little booklets, now decorated with illustrations by Vernon Grant, included a recipe for “War Economy Butter Spread” to “make your butter go twice as far using ‘Junket’ Rennet Tablets.”  Grant also illustrated “Flibbity Jibbit and the Key Keeper,” a story for children about Junket. 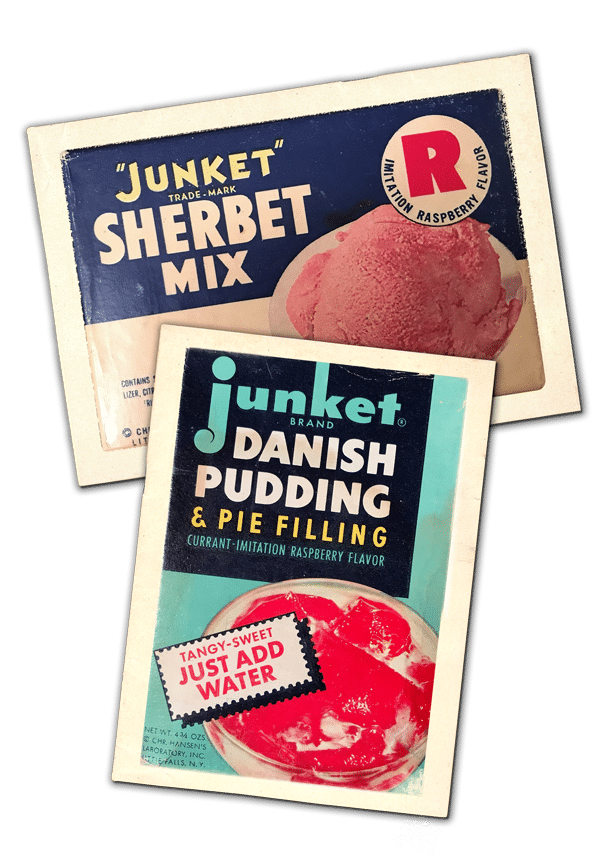 1948 brought Junket Sherbet Mix.  It was the last product developed for The Junket Folks as part of Chr. Hansen’s Laboratory (which still exists today as a huge global bioscience company).  In 1958 the Junket brand and the factory in Little Falls were sold to Salada-Shirrif Horsey,  formed the previous year by the merger of the Salada Tea Company and Shirriff Horsey, known for its flavoring and marmalade.  In 1959 the company was renamed Salada Foods.   Collectible sport coins labeled with both the Salada and Junket names were included in various packages, but the special recipe booklets seem to have been discontinued.

Junket had moved into a whirl of ever-changing companies.  In 1969, Kellogg bought Salada Foods, and the Salada Tea packing operations were merged with Junket in Little Falls in 1973.  In 1988, the American assets of Salada (including Junket) were sold to Redco Foods, Inc.  In 1995, Teekanne, a German tea company, acquired the assets of Redco.  In 2018, the Red Rose and Salada tea parts of Redco were sold to Harris Tea; Junket and the Teekanne tea sales were to stay at Little Falls.  However, not long after that the factory was put up for sale, and so was the Junket Brand. 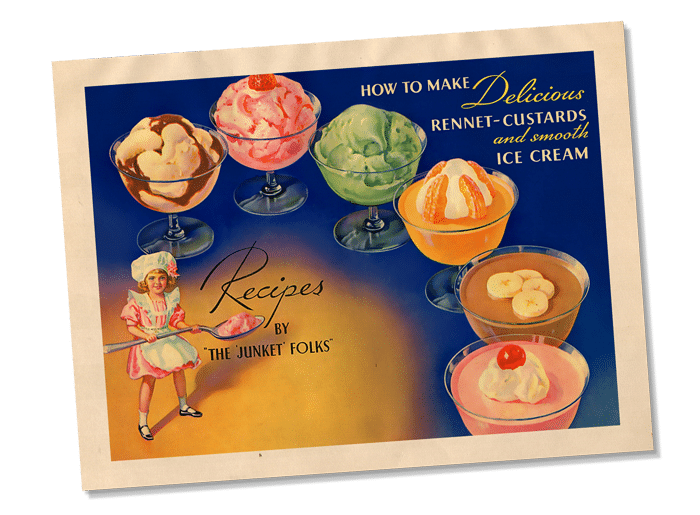 Since January, 2019, the Junket Brand has been headquartered in St. Louis, Missouri.  After years of being shuttled about as a small part of large corporations, it is once again part of a family-owned business, one that really appreciates Junket, and especially Junket ice cream. 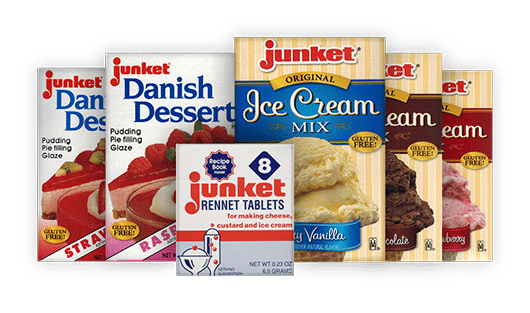 Despite the many changes in the company and its products, at the heart of it is an almost magical product that makes delicious desserts with practically no effort. 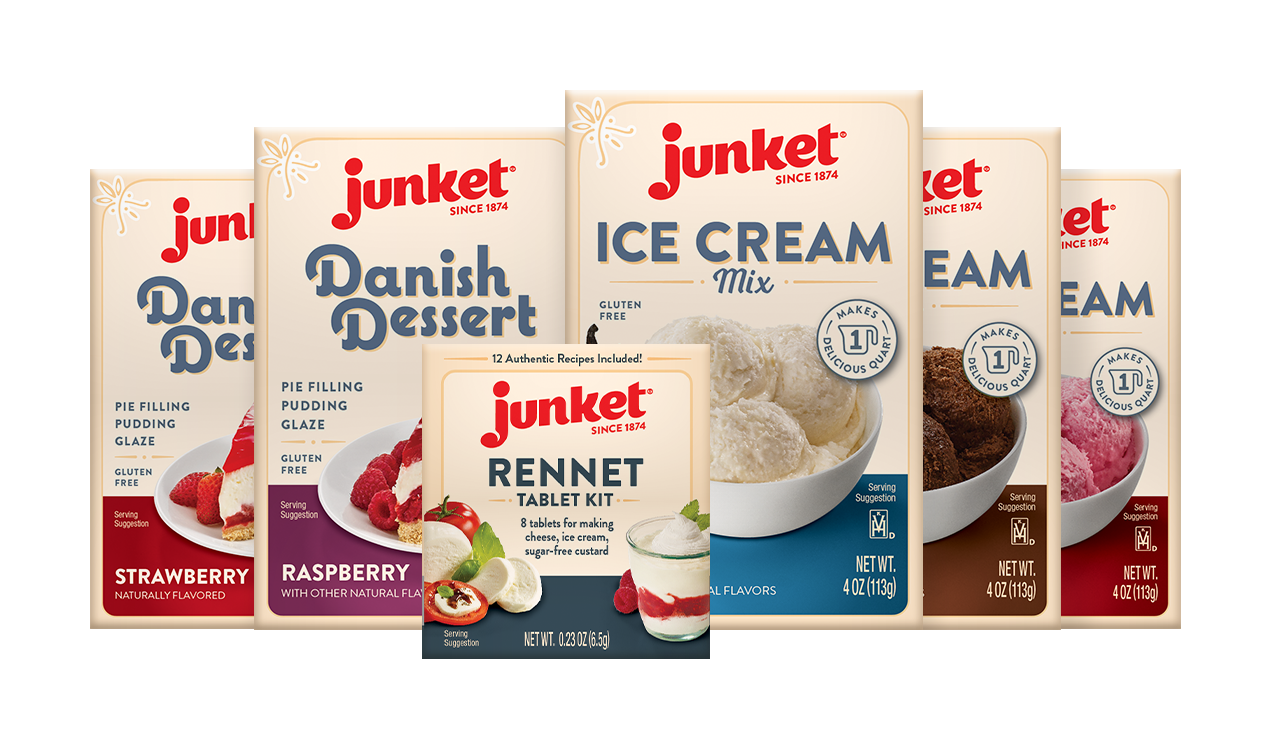 A big part of our story…is you! Read through some of the stories that customers like you have shared with us over the years.